The only upside to Brexit?

Most people will be glad to see the end of 2020 and hope that 2021 will be a better year, however, for anyone trading the British pound the year is not over and they will be looking at what happen to the value of sterling as we head to the Brexit deadline.

This question has been affecting currency markets which have been experiencing volatility ever since Britain voted to leave the European Union on the 23rd June 2016.

Four years have passed and with only a few days left before the 31st of December 2020 deadline, the UK is still negotiating a Brexit deal with the EU.  So far, both sides have failed to achieve a breakthrough on two key points: fishing rights and fair business competition or what is better known as “level playing field”.

The coming three weeks will be crucial.  Having a new deal with the EU would help limit further damage to businesses as they desperately attempt to recover from the pandemic which caused UK GDP to crash by 20% and caused sterling (GBP/ USD) to plunge to thirty-year low of nearly US$1.14 in the month of March.

No one is sure how Brexit might affect trade between Britain and the European Union, but GBP traders appear to be remaining optimistic, which could mean that many of the downsides of a “no-deal Brexit” are already priced in.  Most importantly, the pound exchange rates have shown little reaction to the constant failure in talks between the EU and UK leaders.  Negotiations seem increasingly far apart and yet every sharp decline in GBP/USD has been followed by a strong bullish rally.

We have been advocating a “buy-the-dips” strategy for sterling since May 2020 following multiple consecutive rebounds from the US$1.21 weekly support levels.  Not only did the pound rally nearly 10% since then but it also surged above the key 200-period moving average (orange line) setting the pair on a bullish uptrend.

From a technical perspective, the US$1.3450/ 1.35 resistance area continues to hold back the pair from surging to pre-referendum levels.  This important key level has been tested on three previous occasions: 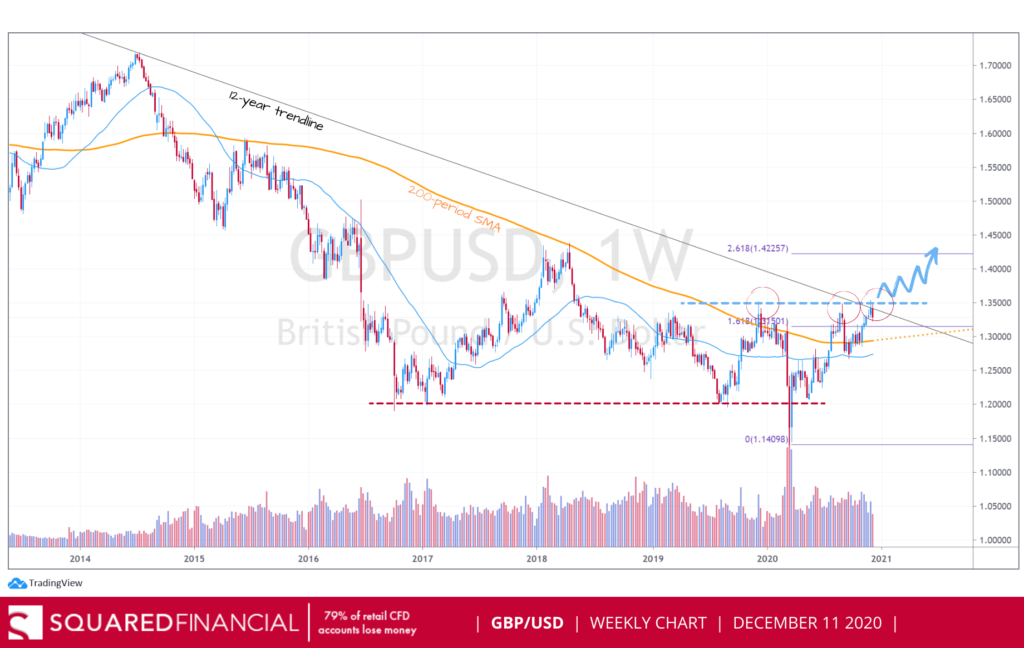 Looking ahead, and although the pound registered a 30-month record close on the weekly chart, it still must seal the deal by printing a close above the 12-year trendline which coincides with the US$1.3450/ 1.35 resistance level.

Once this level is cleared (weekly close above trendline), Fibonacci 2.618 level has the pair set on an uptrend with US$1.4225 as target.  This bullish view will remain intact as long as sterling persists above the 1.618 Fibo level at 1.3150, with the 200-period SMA (orange line) as the last line of defence.

As we close 2020 and the uncertainty about Brexit continues to build, it may be that the British pound surprises many people and provides an unexpected upside to the UK leaving Europe.

For more information about Brexit, read our Brexit Financial Guide.

Risk Warning: CFDs are complex instruments and come with a high risk of losing money rapidly due to leverage. 79% of our retail investor accounts lose money when trading CFDs